It is the largest arts festival in the world – and we were there right smack in the middle of it.  It was not WHY we were there, but it certainly made things more interesting.  In August, Edinburgh hosts the mother of all arts festivals bringing thousands of people to the city. The Edinburgh International Festival includes dozens of theatrical performances, and spawned the “Fringe” Festival…. which is a “sister” festival which, unlike the main festival, is open to any and all performers.  With both festivals going on at the same time along with the Military Tatoo (military band extravaganza that I will cover in another blog post), Edinburgh is PACKED with people during the month of August.  If you have no interest in plays or band performances or crowds, you may prefer a different time to visit Edinburgh – but for us it was a great time to go. 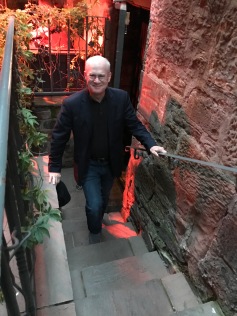 While the main festival is professionally curated, the Fringe Festival is open to anyone and everyone who wishes to perform and can find a venue.  It’s a fascinating time to be in Edinburgh, and we took the opportunity to see several plays.  Choosing which plays to see actually wasn’t as difficult as I thought that it might be.  We walked down the Royal Mile, talking to folks hawking different shows, and chose the ones that seemed most interesting to us.  The first was “Thrill Me”, a musical about Leopold and Loeb, law students who in 1924 thought that they would perform a “perfect crime” of murder – but failed and were caught.  The production was very impressive, although we were not as fond of the play itself.  It is difficult to enjoy a show when there are no characters you can empathize with or relate to.

The second play we chose was Caravaggio, Between the Darkness, which is the story of the great artist Caravaggio after he kills a rival and is forced to flee Rome.   Unlike Thrill Me, Caravaggio is a new original play and we were very impressed both by the writing and the acting.  It is a story Jimmy knew, but I did not – and I learned a lot both about Caravaggio’s life but also about his influence – the latter aided by a concurrent exhibition at the Scottish National Galleries entitled “Beyond Caravaggio” which explores Caravaggio’s influence on other artists.

It is a great way to experience a lot of theater at low cost (ticket prices for the Fringe performances averaged about twelve dollars).  Afterwards we enjoyed a great fish chips meal at the World’s End Pub – which in the 15th century truly was the “world’s end” for Edinburgh residents, who all lived within a huge wall enclosing the city and leading up to Edinburgh Palace.  Beyond the wall there was no protection!  And for our fish and chips, no protection from our ravenous appetites.  The meal was wonderful!  Next stop…. Glasgow, and the architecture of Charles Rennie Mackintosh.