History Class in the Shopping Mall

There are many cities, countries, places named after people – but how many shopping malls carry someone’s moniker?  I cannot find any OTHER than here in Dubai, where we have SO many shopping malls they must run short of names to call them, and so one is named for the most famous person you have probably never heard of – Ibn Battuta. 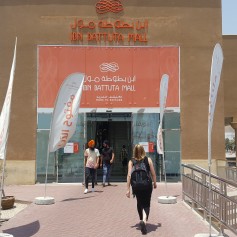 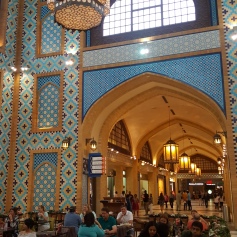 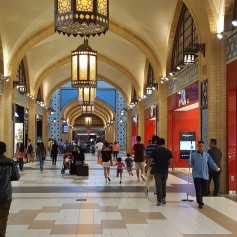 Ibn Battuta knew the Qu’ran by heart.  And loved Islam so much that he vowed to visit everywhere in the world where it was practiced.  As so he did.  Here in Dubai you can learn all about this 14th century traveler by going to the Ibn Battuta Mall.  In this city where shopping malls are everywhere, why NOT name one after an historical figure?  There each of the regions he visited are represented by wings of retail stores.  Egypt, India, China, Andalusia, Persia, and Tunisia.  There is even a display explaining his travels making it perhaps one of the ONLY shopping malls anywhere that could be fair game for a school led field trip.  (The only other exception is perhaps the Dubai Mall, which I think is the only shopping mall anywhere that can boast a true dinosaur skeleton… but I digress).

Ibn Battuta’s mall also has what some call the prettiest Starbucks in the entire world.  The Starbucks is in the center of a dome of gold, azure, and intricate detailing.  What would Ibn Batutta have thought of THAT, I wonder?  And a gigantic hotel attached, the Ibn Battuta Gate Hotel with the huge Moorish arch like the arch found at the Atlantis Palm Resort.  Like a pinhole leading to the desert on one side, the mall on the other….

Mr. Batutta was not an “explorer” because he traveled routes that were not new.  But he traveled more of them than anyone else of that time (as far as we know) and he never took the same route twice.   The Qu’ran teaches that learning and opening one’s mind up to different views and experiences is important in this life, and Ibn Batutta took that to heart, leaving his parents in Algiers and making his way around the known Islamic globe of his time.  Just walking around the Mall bearing his name wears out this modern day traveler, but it is definitely a intriguing trip as shopping malls go.  Perhaps the first time I have left the Mall feeling I learned something without stopping off in the bookstore.

(Ibn Batuta’s full name is a doozy – if you want to know it, and learn more about him, check out the Stuff You Missed in History Class Podcast (love this podcast!) from August 2, 2017 on Ibn Battuta, Islamic Explorer).