We say we are “putting pen to paper” when we sign contracts- but what about when that “paper” is a building instead?  How would you design a building to look like a contract?  Well, for an idea of what this might look like, just visit the Etihad Museum in Dubai.  It is magnetic and stunning – and I was pleasantly surprised to learn rather than the “shifting sands” or “desert” analogies used by so many architects here to describe projects, the architects of the Etihad Museum describe their project in an unusual and different way.  They describe it in terms of the contract signed to create the United Arab Emirates (the “Unification Agreement” that the building honors):

“(The building’s) undulating parabolic waves represent the parchment upon which the unification agreement was written, with its tapering golden columns representing the pens with which it was signed.”

One face of the multifaceted Etihad Museum in Dubai.

The plaza beyond houses a tremendous flagpole and a huge UAE flag.

The seven pillars inside the Etihad Museum represent the seven signatories to the contract forming the United Arab Emirates.

Another view of the columns representing the pens which signed the UAE founding agreement.

It is on the land where the Etihad Museum stands that the UAE unification agreement was signed in 1971.  Britain had announced its relinquishment of the Trucial States (as they were then called) and the states had to determine how they would govern themselves going forward.  The museum tells the story through pictures, interactive exhibits, and several widescreen movies (the movies are in Arabic, but have English subtitles and are very well done.  One is even a three dimensional movie).  There is also a library open to visitors with more than 3,000 pieces of research materials, and several staff members present to aid in your search.

I loved this place.  It was wonderful just to wander around the grounds, and interesting to learn more about this area of the world.  Parking is plentiful and free and it is not expensive to enter the Museum (25 Dhs or $6.75 for adults).   All in all an important place to visit in Dubai if only to marvel at how quickly and peacefully the UAE came together – how far it has come – and in wandering the grounds, how far YOU have come to get here…

The Etihad Museum from one end of the plaza.

The furniture inside is crafted to look like settling sand dunes at the Etihad Museum.

Jimmy in the foyer of the Etihad Museum.

The Etihad Museum as seen from the grounds of the museum.

A closer up view of the Etihad Museum. 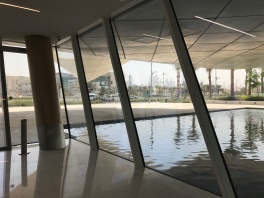 The Etihad Museum appears to float on water surrounding portions of the structure.