There IS no Dubai dress code, other than an admonition to dress modestly (which for women means covering shoulders and knees).  And plenty of people here pay no attention to that anyway (a male friend who came to visit said that he was surprised and disheartened by the level of “undress” among shoppers in Dubai Mall).

Don’t get me wrong – there are plenty of abayas (the long black robes) and shaylas (the headscarf) and even burqas here (the face covering) but there’s no requirement that anyone wear them, nor is there a requirement that the clothing be black (that’s more of a tradition rather than a mandate, apparently).   I have heard many explanations about why women wear the traditional abayas, and I think the truth for each woman may be different.  Several women I know here who were educated in the West dressed in western clothing while away at school but wear the traditional clothing when they come home, and have made the personal choice to do so.  In addition to religious and family tradition, there is some level of joy in being able to put on a robe and headscarf over whatever you choose – even your pajamas – and to not have to worry about fixing your hair.

I have become accustomed to seeing women dressed head to toe in black and it is not  menacing or as disconcerting to me.  See, underneath, the women who cover here are not much different from me (or from you), and the dress not as divisive as some believe.  In fact,  I took an American friend to a recent “Modest Fashion Show” here  in Dubai – she was impressed by the fashion and indicated that she would wear some of the clothes presented and feel quite comfortable doing so (I agreed!).   And Vogue Arabia magazine fashions do not seem all that different from the American version.  I think we could all benefit by more interaction between cultures to allay prejudice and fear – and the key to that is meeting the women behind the clothing, and not worrying so much about the differences in what we wear. 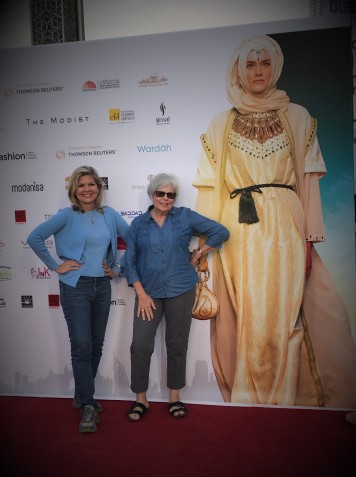 With my good friend Ann Kennedy, pretending we are models at Dubai’s Modest Fashion Show.

A booth at the Dubai Modest Fashion Show.