They Left in the Middle of the Night….

….or so it seems.  There is an entire abandoned village outside of Dubai, just north of Ras al Khaimah, where dwellings are crumbling into dust and the jinns play in the wind.  (The Islamic version of “ghosts” are jinns, intelligent spirits lower ranking than angels and able to haunt the living world).

The official name of this place is Al Jazirat Al Hamra, but you can find it easily on Google Maps by searching for Ghost Village (really!) in North Ras al Khaimah.   This was once a pearling and fishing village (for hundreds of years) but in the 1960’s residents moved out seemingly overnight when there was a dispute with local authorities and the community decided to move to Abu Dhabi (what the dispute might be no one seems to know or say, but it is long past now).   There were about 2,000 people living here when the town closed down.

It is a large area now surrounded by fence, but Jimmy and I drove around the perimeter until we came to a large opening in the fence.  It seemed clear that it was all right to enter and there were others there while we wandered around.  By examining the crumbling walls, you can see evidence of the old manner of construction – the walls made of coral covered in mud.  There is still some original tilework and evidence of the old palm frond roofs.

It appears that the local authorities are now restoring the village – some areas are fenced off with signs not to enter, and in others buildings are marked with “YES” or “NO” presumably marking which will stay and which will be torn down.  While in years past there were possessions, cars, and furniture here, evidence of a quick population exit, those things have been removed and all that is left are the buildings themselves, including mosques, dwellings of various sizes, and a communal area that might have contained a pool.  You have to walk through, not drive – while there are old streets, it is not advisable to drive given the state of the roads, and even walking you must be careful not to fall into an old well or disturb any historic elements.

We found it fascinating, this old abandoned village, and can’t wait to see what life the restoration brings to a place once forgotten.

In 1830 about 200 people lived here in Al Jazirat Al Hamra. The population swelled to about 2,000 before the population left for Abu Dhabi.

Some believe ghosts (“jinns”) live here and may have scared the occupants away, but Al Jazirat Al Hamra just feels very peaceful to us – of course, we were not there at night!

At Jazirat Al Hamra you can see evidence of the finishes of the old buildings, now worn and crumbling. 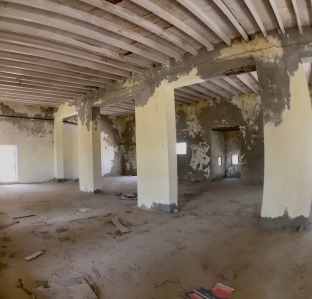 This is a view of the inside of a mosque at Al Jazirat Al Hamra. While near Ras Al Khaimah, the town was once part of Sharjah.

Jimmy and I seeking shelter during a 101 degree day visit to Al Jazirat Al Hamra.

The crumbling walls reveal the coral used in the construction of walls at Al Jazirat Al Hamra. 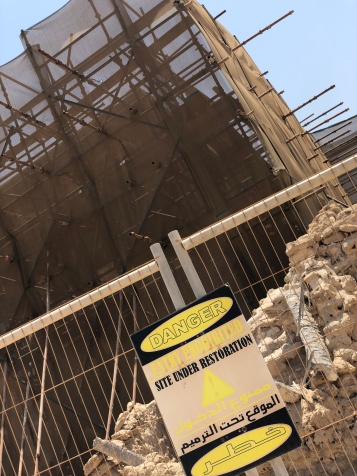