In Scotland, we wanted the full Scottish experience.  Since we were in Edinburgh in August, I figured that meant we must attend the Military Tatoo.  It is a full scale extravaganza the size of a major league ball game but with more bagpipes, and a whole lot of pomp and circumstance.  It is a difficult event to fully describe, but basically it consists of lots of bagpipes and bands, with dancers, lighting effects (including FIRE), psychadelic patterns projected onto Edinburgh Castle, gymnasts, and fireworks. 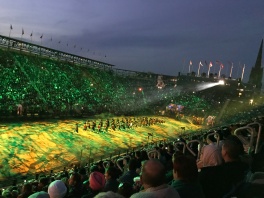 The field in front of Edinburgh Castle is lit up with many different lighting effects for the Tatoo. 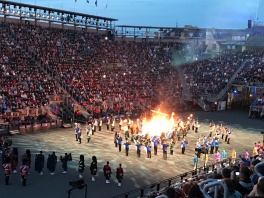 The Tatoo has EVERYTHING – even fire.

The Scottish sky is a stunning backdrop to the bands coming from the Edinburgh Castle onto the Tatoo field in front. 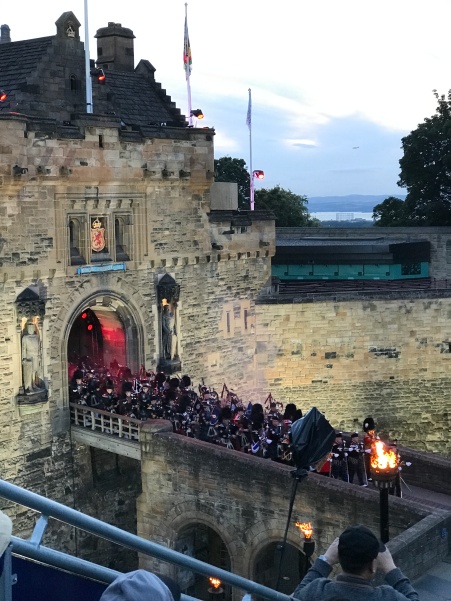 For the Tatoo, many bands come from Edinburgh Castle onto the field in front. 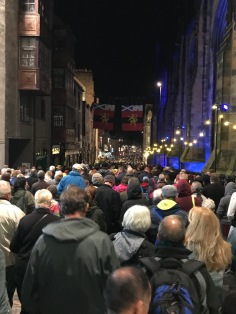 Crowding into the Edinburgh Castle for the Military Tatoo. 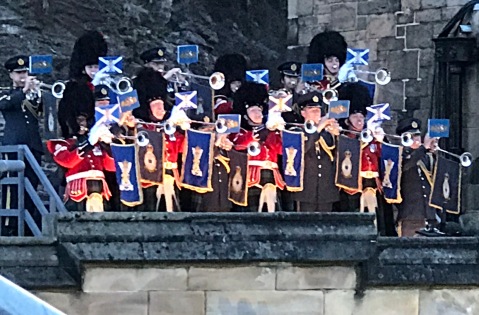 The start of the Edinburgh Castle Military Tatoo.

Obviously no tatooing is involved in the Tatoo, even though soldiers are involved.  The term actually comes from a time when innkeepers would be told to “TURN OFF THE TAPS” so that the soldiers would stop drinking and go to bed in preparation for the next day’s battle.  (So “turn off the taps” must sound something like “tatoo” in Gaelic, I suppose).

The climax of the evening is the lone piper on the castle battlements, playing a pibroch in memory of dead comrades-in-arms, followed by bands joining in a medley of traditional Scottish tunes.  It honestly was something I would not have sought out.  I bought tickets on a whim for our last night in Scotland so we would end with a genuine Scottish experience.  And it was well worth it!  If you are in Edinburgh in August, definitely GO.  I will say that I purchased the cheapest tickets available – and we thought that the seats were GREAT.  No need to buy the most expensive tickets, in my view.  Our seats were closest to the castle, were the least expensive, and are the ones I would buy again. 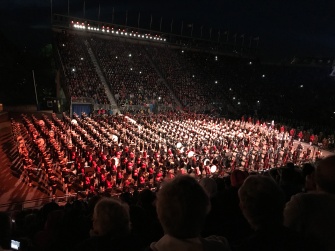